On this day in Def Leppard history, March 31, 1992, we released the album Adrenalize. Head over to Def Leppard’s Instagram Page & tell us your favorite song! 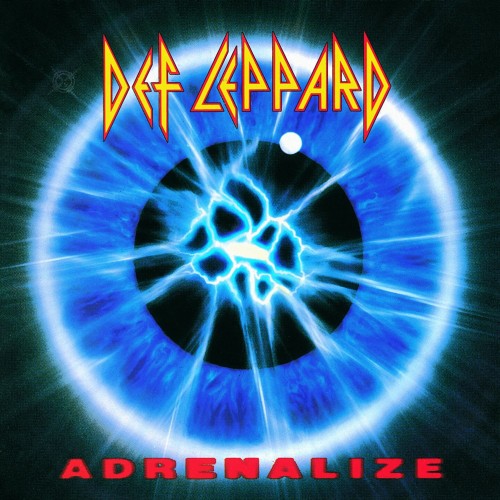 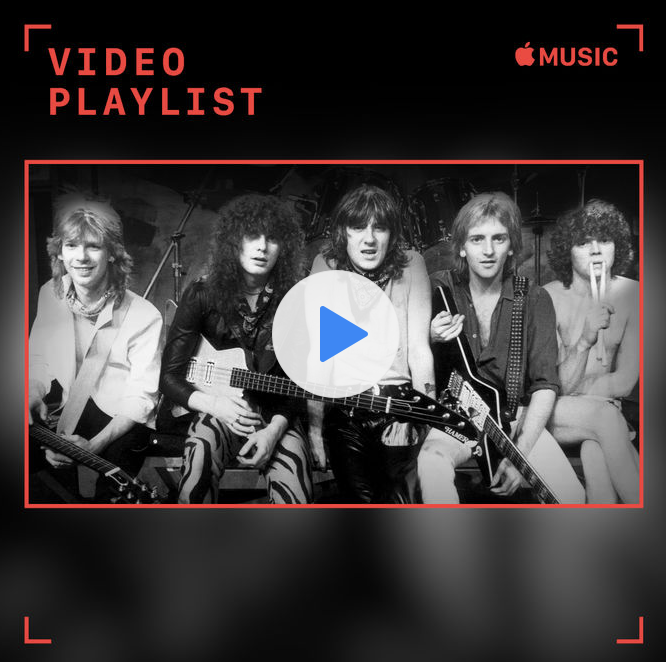 ROCK star Vivian Campbell has joined forces with Northern Ireland Hospice to become a celebrity Ambassador with the palliative care charity which cares for more than 3,500 adults and children here every year.

The Def Leppard guitarist, who performs with the band in his native Belfast in December, confirmed his new role prior to a concert in London last weekend, where he met with Northern Ireland Hospice Chairperson Margaret Butler.

Campbell, a former Rathmore Grammar School pupil who progressed in the rock arena with bands such as Dio, Whitesnake and Riverdogs, joined Def Leppard in 1992. He has released a number of top albums with the Sheffield rockers such as Slang, Euphoria, Songs from the Sparkle Lounge and most recently the self-titled album which received critical acclaim.

In 2013, Campbell was diagnosed with Hodgkin’s Lymphoma, and openly discussed his treatment with patients when he made a private visit to Northern Ireland Hospice in November last year.

He said: “I’ve always considered myself to be blessed in my music career and it makes me proud that an organization such as Northern Ireland Hospice recognize this and have asked that I represent what they do.

“I have personal experience too with my battle with Hodgkin’s Lymphoma and I can empathize with patients and families on their journeys. Northern Ireland Hospice is a wonderful organization that I am happy to support and highlight the palliative care services it provides.”

Via Rolling Stone: Def Leppard will compile their studio catalog, rare B-sides and live cuts in a new career-spanning box set series. The first of four installments, the Eighties-centric Volume One, is out June 1st via Bludgeon Riffola/Mercury/UMe.

Volume One is dedicated to the British hard rock band’s first four studio albums – 1980’s On Through the Night, 1981’s High ‘n’ Dry, 1983’s Pyromania and 1987’s Hysteria – on both eight-LP and seven-CD sets. The bonus material includes early recordings, B-sides and the concert album Live at the LA Forum 1983, previously issued as a bonus disc in the deluxe CD edition of Pyromania. 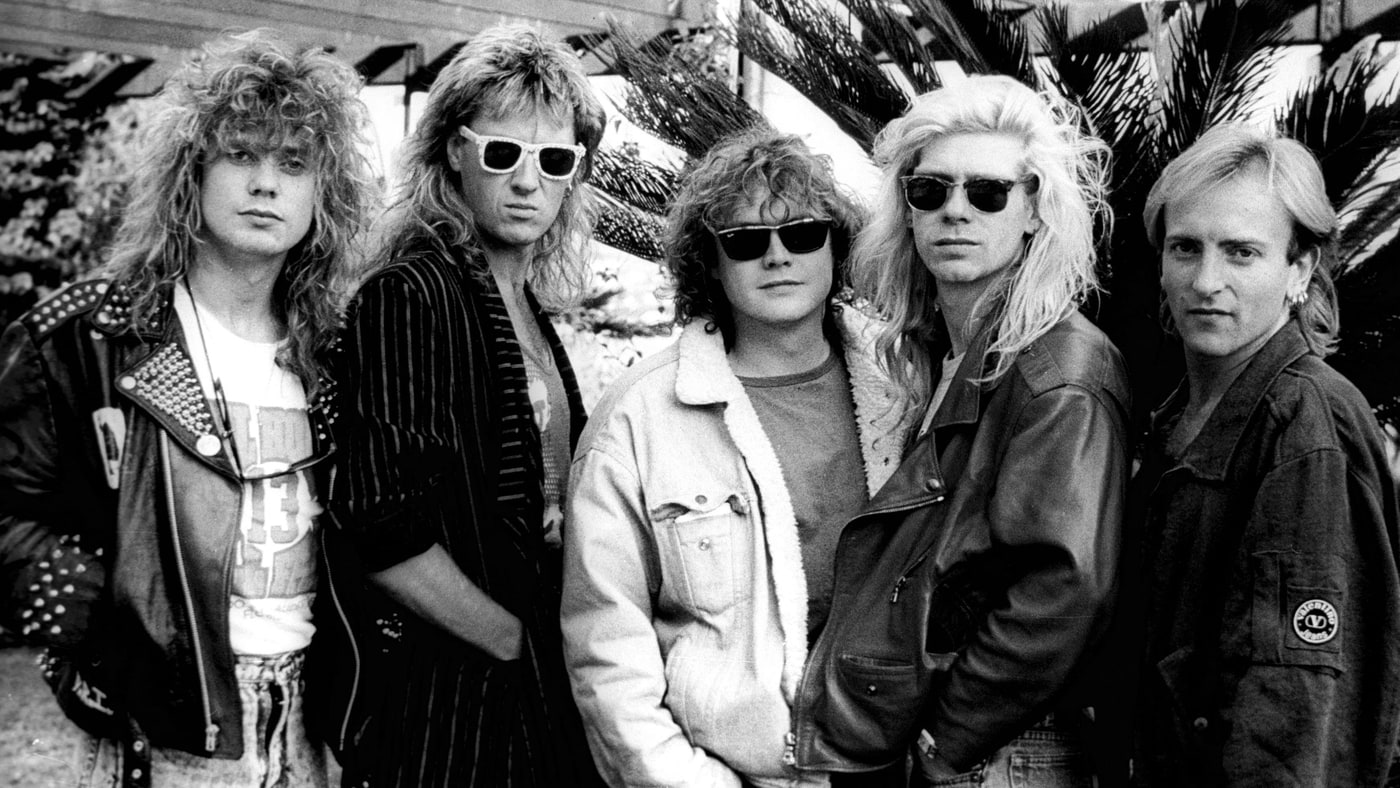 Check out the full interview below. 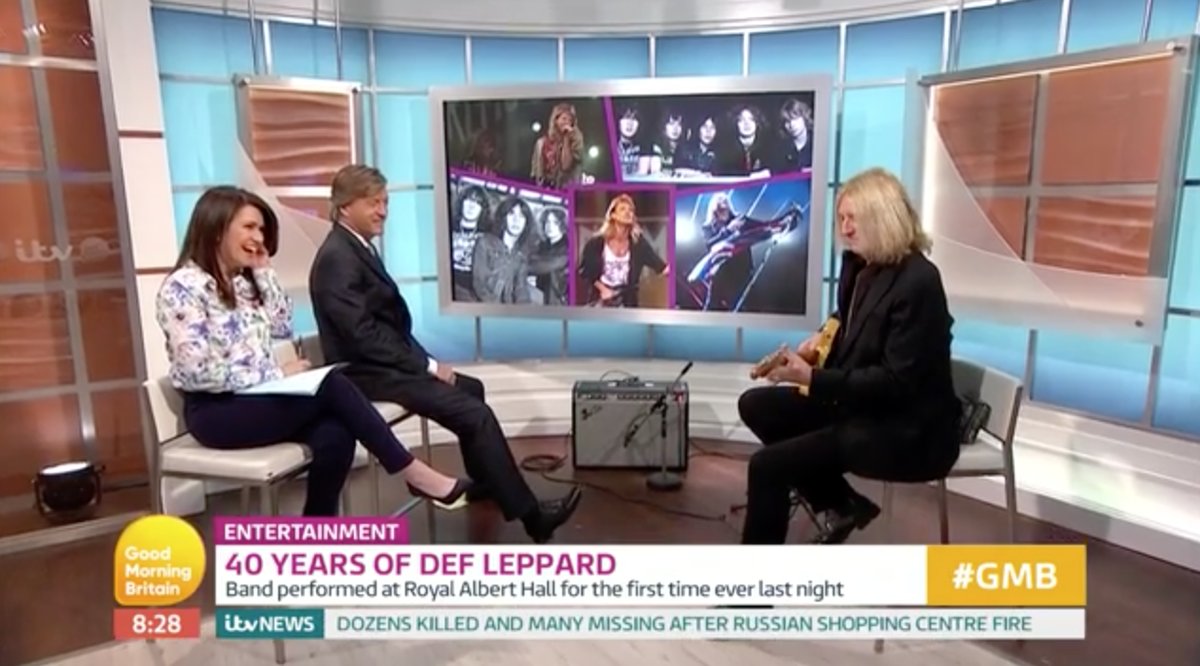 This first volume of the band’s complete recorded output comes in both limited-edition 180-gram heavyweight vinyl and CD box sets, each featuring Def Leppard’s first four studio albums — along with some choice bonus live and studio material — all spread across 8LPs and 7CDs, respectively.

The Volume One collection includes bonus material including Live At The LA Forum 1983, originally released as a bonus disc in the deluxe CD version of Pyromania, making this the first-ever vinyl offering of the complete show. This 2LP version comes with a new sleeve and inner bags.

Rarities Volume 1 has been specially compiled by Joe Elliott, containing rare B-sides and recordings from Def Leppard’s early years, all in a newly commissioned sleeve. Finally, rounding out this collection is the 7-inch vinyl single and 3-inch CD of Def Leppard’s original, self-titled EP.

The fiery Volume One collection contains all of Def Leppard’s iconic 1980s recordings with reproductions of the original packaging in both formats, plus the added bonus of a replica 7-inch single and 3-inch CD of the band’s original independent EP, the self-titled The Def Leppard E.P.

Each album in the box set was mastered by longtime band producer/soundmaster Ronan McHugh and cut by Greg Moore.

Volume One is an extraordinary early chronicle of a band whose global impact only continues to grow. Def Leppard have a cumulative sales tally of over 100 million albums worldwide, not to mention putting on consistently sold-out world tours. Def Leppard recently authorized their entire recorded catalog for access on streaming and download platforms, a move that resulted in a nearly 400 percent surge in catalog sales on the first day alone, as well as appearances in the iTunes Top 10 charts in over 30 countries worldwide.

Volume One kicks off with Def Leppard’s 1980 debut album On Through The Night, which immediately put the rock world on notice that the band were destined for big things, having charted at No. 15 in the U.K. and No. 51 in the U.S. Produced by Tom Allom (Judas Priest, Black Sabbath), On Through The Night features many of the band’s live favorites (“Rock Brigade,” “Hello America”), along with updated versions of early singles (“Rocks Off”). The album achieved platinum status in 1989, and the version included here is the rare Australian gatefold-sleeve version.

Released in 1981, High ’N’ Dry was Def Leppard’s second platinum album and the first to be produced by Robert “Mutt” Lange (AC/DC, Foreigner). It reached No. 26 in the U.K. and No. 38 in the U.S., having garnered much impactful FM airplay with the propulsive “Let It Go” and one of the band’s most popular signature tunes to this day, “Bringin’ On The Heartbreak.”

Pyromania, released in 1983, saw the band become indisputable rock legends. It was the first record to feature guitars by Phil Collen, who had replaced Pete Willis. The album contains massive MTV hits “Photograph” and “Rock Of Ages,” as well as fist-pumper “Rock! Rock! (Till You Drop),”. Pyromania reached No. 2 in the U.S. and went Diamond, with over 10 million album sales.

Def Leppard released Hysteria in 1987, the band’s best-selling record to date having sold over 25 million copies worldwide. It went to No. 1 in the U.K., U.S., and Australia, and is also the band’s second album to achieve Diamond status in the U.S.. Notes Collen, “Not many people even get Platinum albums anymore! Going Diamond is going 10 times Platinum in America, which is a huge deal — and we’ve got two of those. We’re really pleased that we got them. It’s pretty cool that we’ve achieved that.”

Produced by Mutt Lange, Hysteria took over three years to make, ultimately featuring seven charting singles (including No. 1 smash “Love Bites” and “Pour Some Sugar On Me”), and has been rightly nicknamed as “heavy metal’s Thriller.” Clocking in at just over 62 minutes, Hysteria was then one of the longest albums ever issued on a single vinyl record — but for this special box set release, it has been made into a double LP for maximum sound-quality purposes.

Def Leppard’s collective vocal prowess is but one of the many things that helped cement their unparalleled standing in rock history, as Joe Elliott explains: “The way we did our harmonies was based on the multitracking abilities of a band like Queen, but we took what they did to the next level. Queen maybe tripled or quadrupled their backing vocals — but we did it like 20 times! We wanted it to sound like the quality of Queen but have the size of Slade. The way we did it gave us a unique sound. And that’s the whole point of an album, really — capturing a band’s unique dynamics.” Adds Phil Collen, “The American bands had beautiful vocals, with all those wonderful harmonies. But we added a bit of a punk ethos in there with ours, where it became a bit more charming and anthemic with screaming and shouting. And that was a very British thing, I think, that made us different from a lot of the American bands.”

Def Leppard’s Volume One is but the first hot, sticky-sweet taste of an impressive career that remains ever on the rise. Can you feel it, do you believe it? 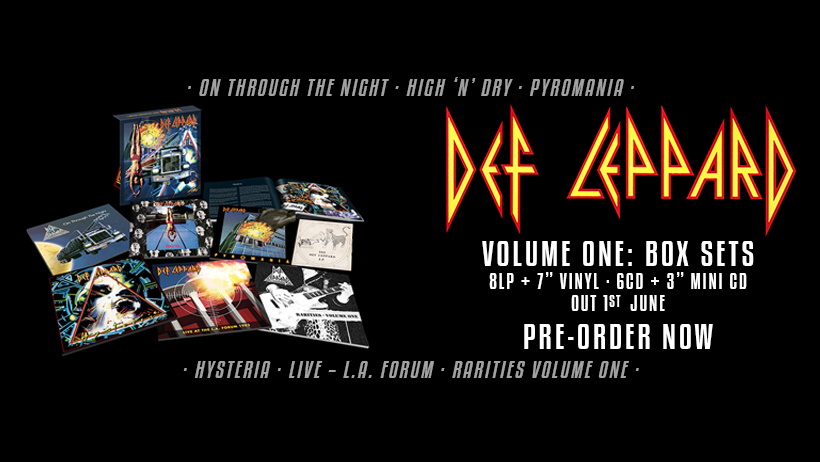 Northern Irish rock guitarist Vivian Campbell of Def Leppard has always been seduced by the sound of rock n’ roll. Check out a special behind the scenes look at his Signature Custom Les Paul. Campbell has been shredding Les Paul’s from the age of 15, all of his favorite elements have been distilled into this custom Gibson. Find out the unique inspiration behind the color of this Les Paul and get a taste of the insane sounds this custom shop signature model can produce.

Watch below the full interview filmed at Gibson Studios

Vivian Campbell has been a musical force and guitar hero throughout his career, compiling a rock ‘n roll resume as jaw-dropping as his playing abilities. His instrument of choice for nearly all that time has been a Gibson Les Paul. So when Gibson Custom Shop approached Vivian about collaborating on a signature model, the goal was to keep the guitar familiar and highly playable while capturing Vivian’s personality in both aesthetics and tone. 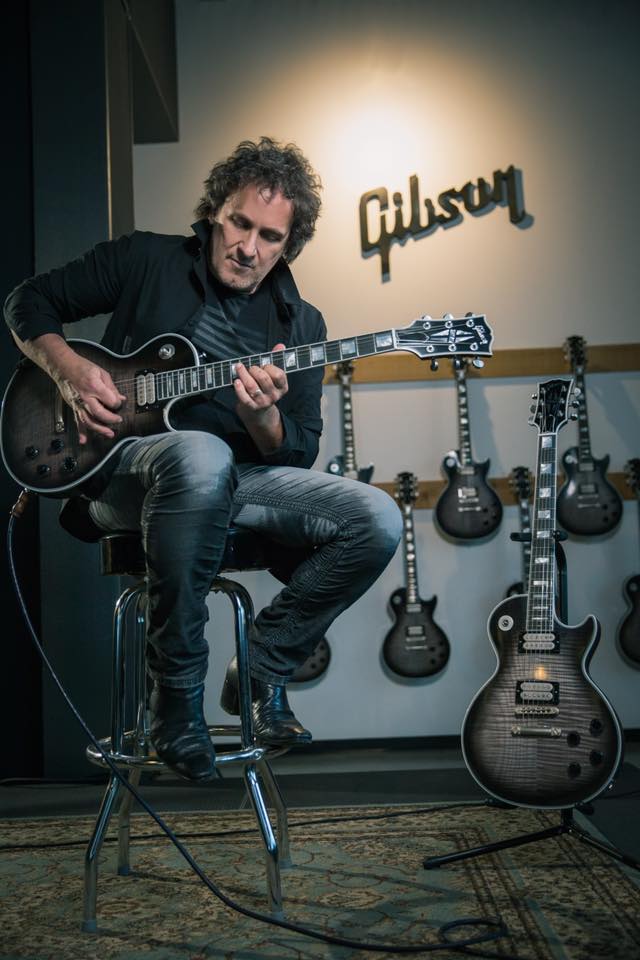 This limited-edition Vivian Campbell Les Paul Custom is the result of months of thoughtful design and construction tweaks and it has received Vivian’s final approval. It features a fast-playing 1970s neck profile, passive high-output humbuckers, satin chrome parts, Les Paul Custom “tuxedo” appointments and a rubbed-patina black-and-grey color scheme inspired by the coastal rock formations of Vivian’s hometown in Northern Ireland. Every part of its creation was a thorough and meticulous team effort from the skilled artisans at Gibson Custom. 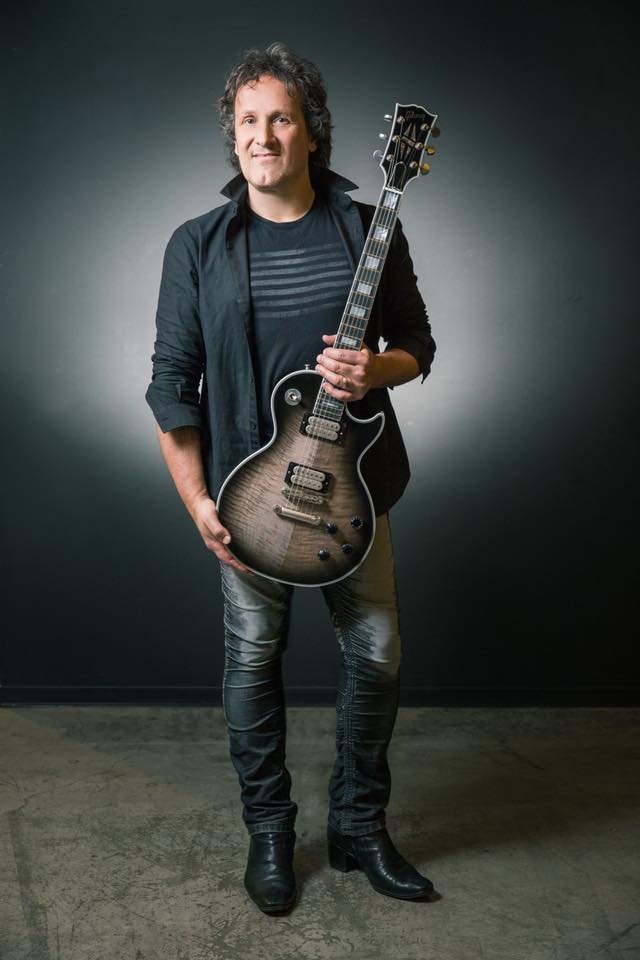 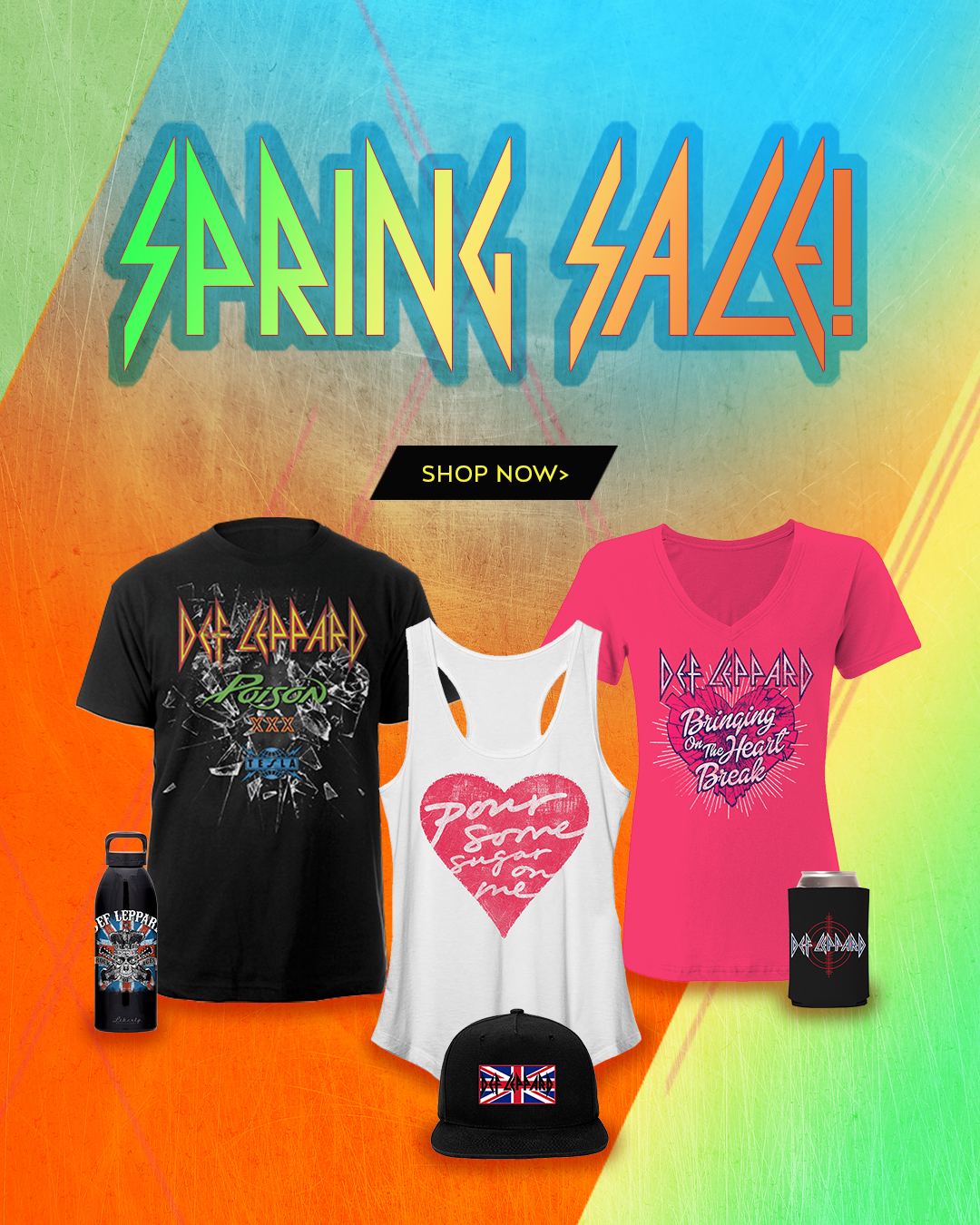 From “The Man Who Puts the Fast in Belfast” Ireland!  Listen now to Viv’s Let’s Get ShamROCKED playlist now on Spotify HERE 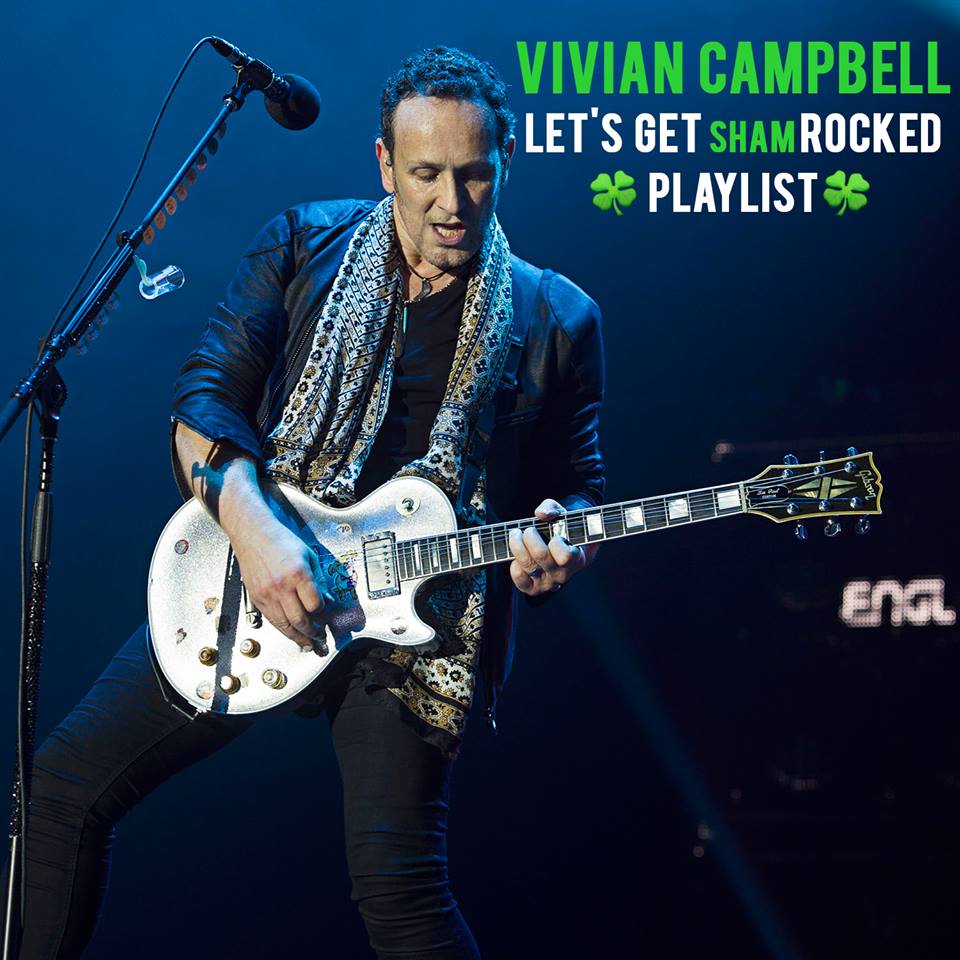 Attn: Washington, DC area!  Rick Allen will be at the Wentworth Gallery this weekend to share his artwork collection and meet fans at the below locations and times.  For more details go HERE