Via The Howard Stern Show: Def Leppard rocked the Stern Show studio once again on Tuesday morning, sitting down with Howard just a few days before the band’s long-awaited induction into the Rock and Roll Hall of Fame. Frontman Joe Elliott, bassist Rick Savage, drummer Rick Allen, and guitarists Phil Collen and Vivian Campbell tackled an array of subjects during their visit, including drawing inspiration from David Bowie and Queen, making their multi-platinum albums “Hysteria” and “Pyromania,” and how Allen persevered after a horrible 1984 car accident took his left arm.

The band also performed two live songs for Howard: a cover a Bowie’s “Ziggy Stardust” and a stripped-down rendition of one of their many chart-topping originals, “Pour Some Sugar on Me” (above).

Check out all of the highlights from Def Leppard’s Stern Show visit (below). 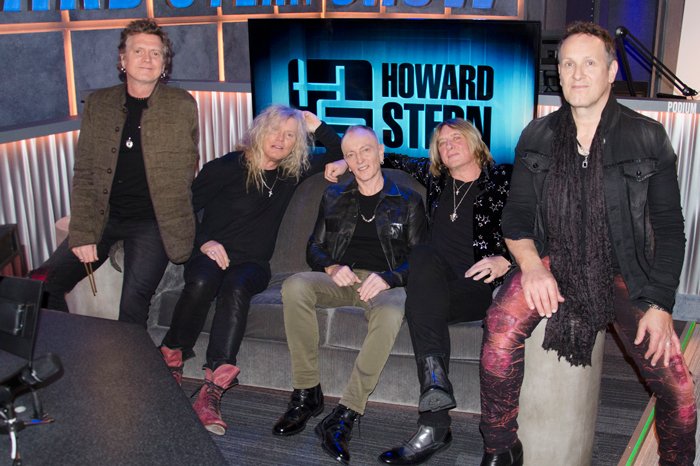 Def Leppard listed quite a few musical inspirations during their conversation with Howard, like Queen, Marc Bolan of T. Rex fame, Thin Lizzy, AC/DC, and even punk acts like the Clash, but few entertainers shaped their trajectory quite so much as David Bowie.

“We were lucky we grew up in an era … we saw black-and-white turn into color,” lead singer Joe Elliott told Howard. “So, we saw Gerry and the Pacemakers or Herman’s Hermits and Tom Jones in black-and-white, and then we saw Bowie and Slade and T. Rex in color with all this glittery stuff. And it was mind-blowing – it was an absolute, you know, sensory overload on your eyes,” he continued.

Joe eventually performed alongside Bowie during a 1992 tribute to recently departed Queen singer Freddie Mercury. They—along with Mott the Hoople’s Ian Hunter, Mick Ronson, and the surviving members of Queen—delivered an epic rendition of “All the Young Dudes,” which Joe said also happens to be his favorite song and one of three tunes he wants played at his funeral.

But Joe and Bowie’s relationship actually stretches back a few years further. He told Howard his first run-in with the rock icon actually occurred at Bono’s house in 1990 after the U2 singer invited him to a barbecue at his home in Ireland. “He says, ‘Come with me, I want to introduce you to somebody,’” Joe recounted. “And he walks me up into this room where the snooker table is, and Bowie sat on the snooker table, and Bono says, ‘I thought you might just want five minutes.’”

“It was,” Joe laughed. “I thought I was being punked.”

“It got even better,” he continued, recalling Bowie then whisked them away in a Mini Cooper to surprise the Edge, Bono’s U2 bandmate, while he was out to dinner on his birthday. “We run into the restaurant, we sing ‘Happy Birthday’ to the Edge, and everybody’s giggling and laughing … Bowie’s totally instigating this, like a kid.”

The Howard Stern Show studios aren’t Def Leppard’s only stop while the British band visits New York City. On Friday, Queen guitarist Brian May will introduce them at the 34th Rock and Roll Hall of Fame Induction Ceremony at Brooklyn’s Barclays Center where they will join the ranks of so many of their idols.

It’s a long time coming for Def Leppard, which has sold over 100 million albums and toured the world many times over since forming in 1977 but somehow hadn’t yet been inducted. Howard wondered if they even cared about being recognized by the Rock Hall after being snubbed for so long despite possibly being the biggest band in the world at one time.

“Yes, we do now,” Joe laughed. “Now that we’ve been nominated and inducted and chosen, yes, we care.”

“It’s the same as the Grammys,” Phil Collen added. “When we had two diamond albums—two 10-times platinum albums—there was no category for us.”

The band believes its fans are one of the reasons for its 2019 induction. “In fairness, before the fan vote, I think it was a very elitist thing, which is why we kind of shied away … if you weren’t Lou Reed or R.E.M. or Loudon Wainwright III … no, no, they didn’t want us.”

The Rock and Roll Hall of fame wants them now, of course, and the guys feels honored to be introduced by May, one of the many artists who inspired them. “Queen is the blueprint for Def Leppard, really … so that’s what we wanted, it was just whether he could do or not,” Phil said.

Howard wondered if May’s guitar skills and innovations are underrated. “I’m only a bass player, but in my opinion absolutely, he’s one of the reasons I wanted to be in a band,” Rick Savage told him. 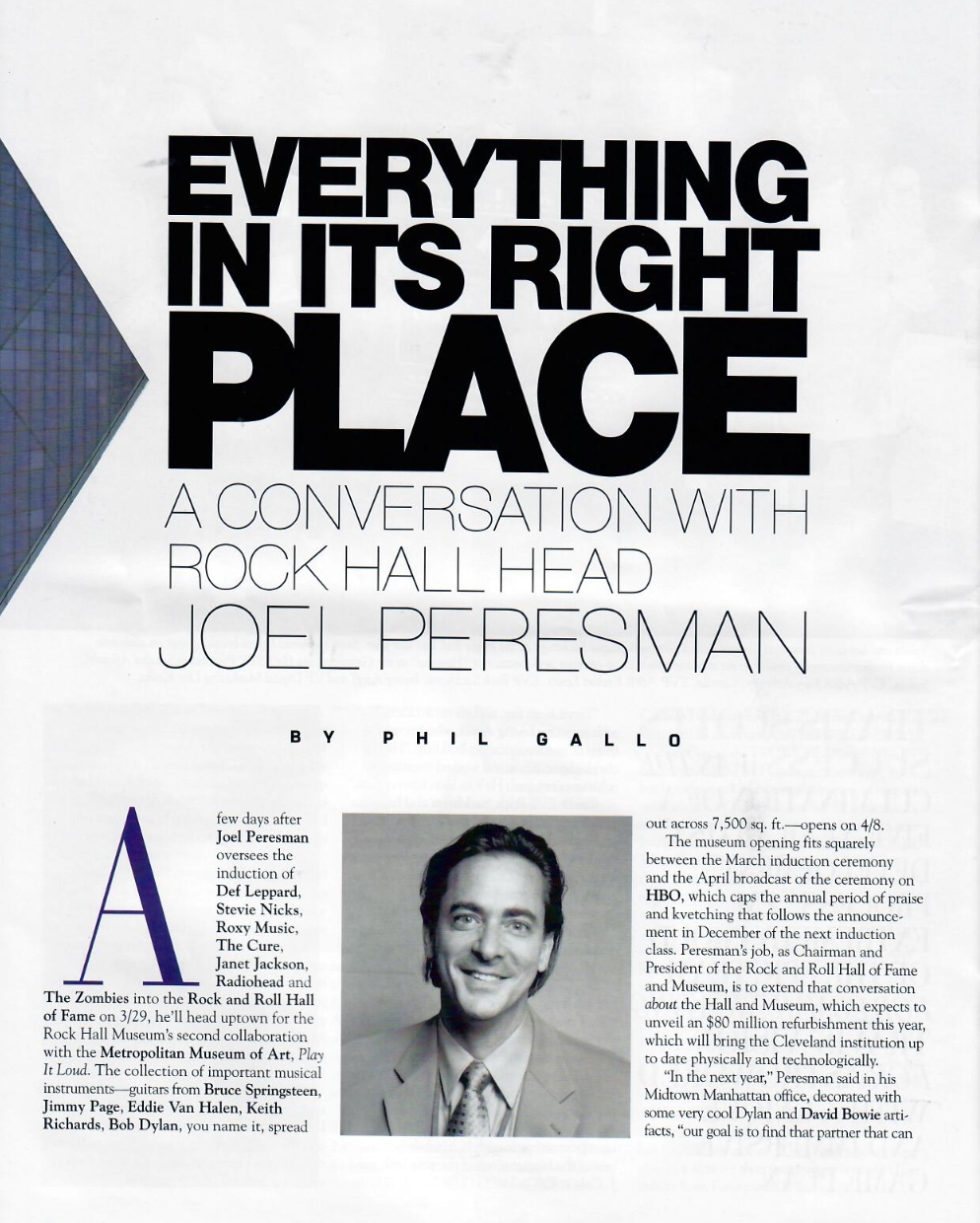 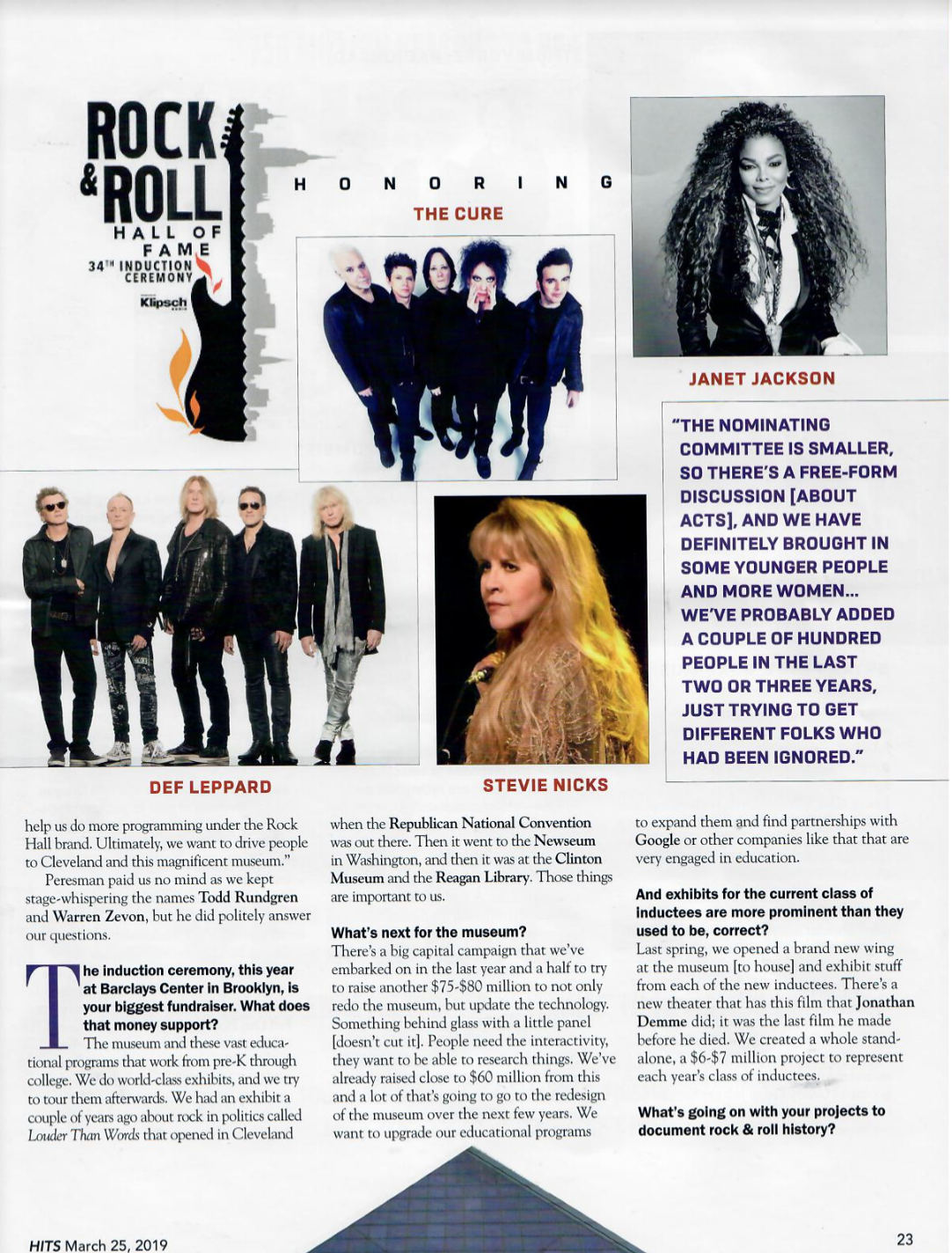 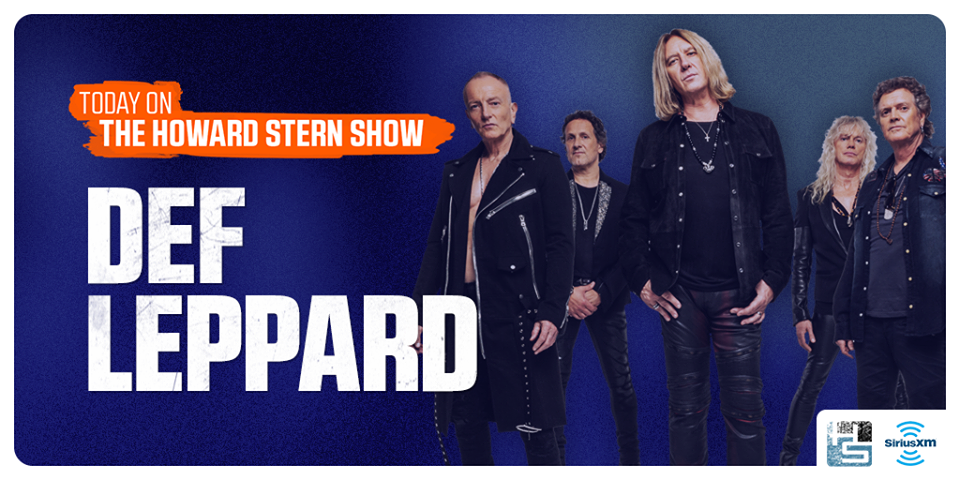 Tune in next Wednesday, March 27 at 8am EST on ABC for a special live performance by Def Leppard! 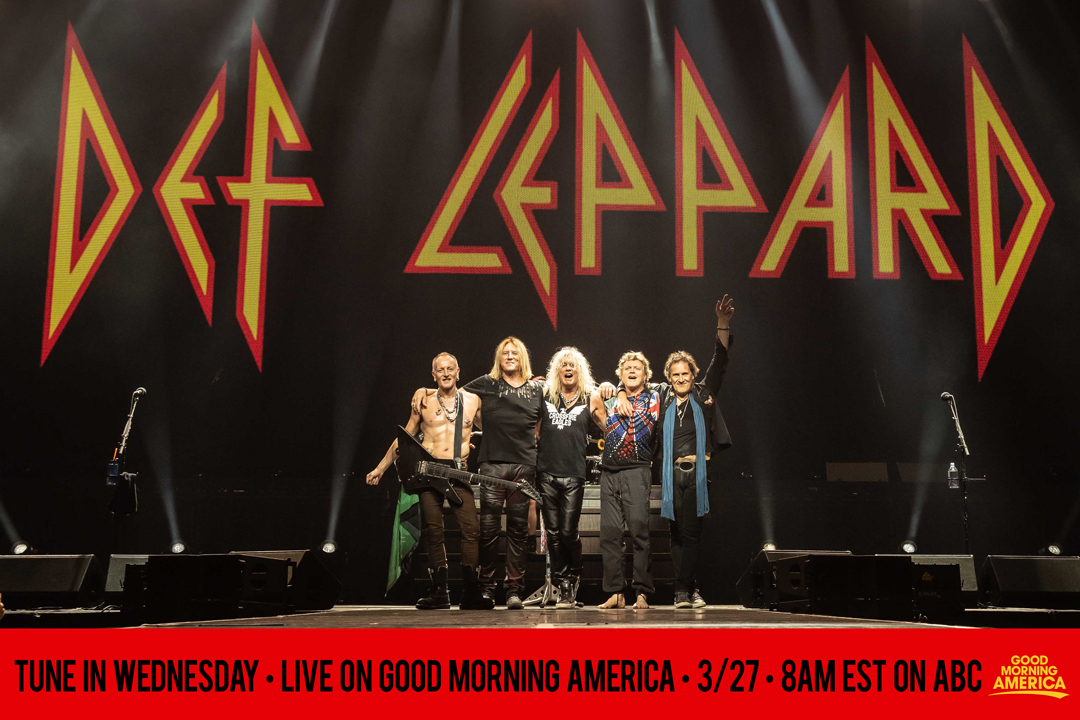 Via The Eagle: Rick Allen has been a member of Def Leppard from his teens.

He has ridden a roller coaster of a career with the band.

From losing his arm to returning behind the kit to play again like nobody had done before.

Rick spoke to me about his art, the band’s Rock Hall induction, their second Vegas residency and a lot more.

Listen to the interview below.

This weeks program features songs from BIFFY CIYRO, KINKS,  CARS, BAD CITY, ALICE COOPER amongst others, as well as some stories from Joe!

Thrilled to announce our friend Brian May of Queen will be inducting us into the Rock and Roll Hall of Fame in Brooklyn. The show will air on HBO April 27. 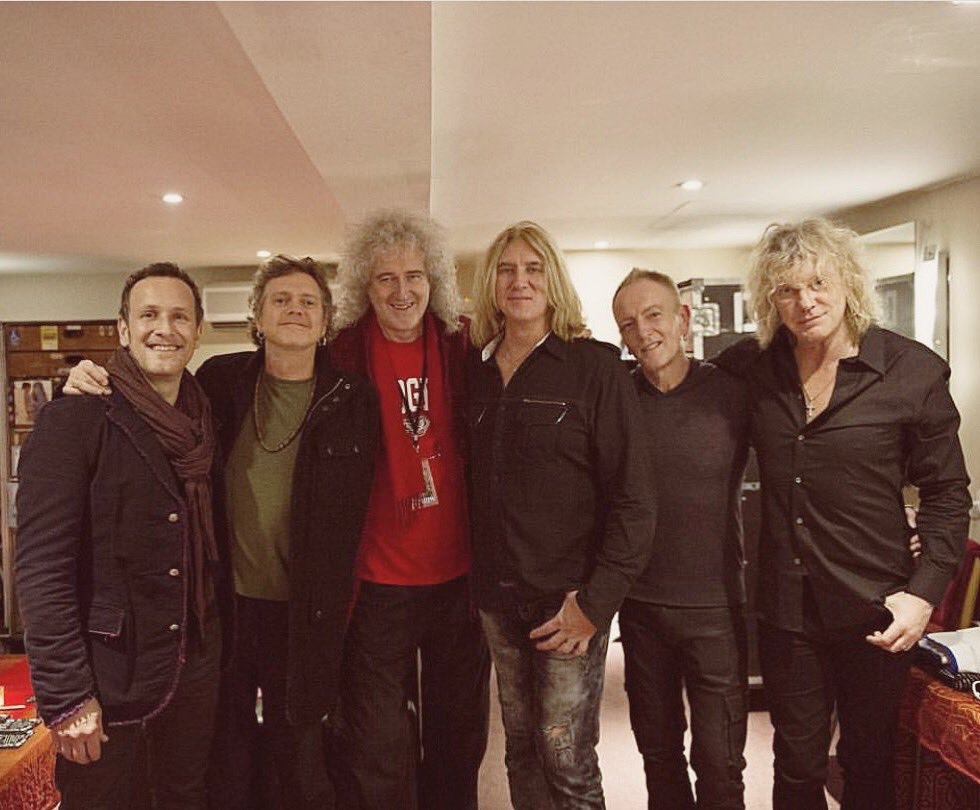 The pre-ceremony red carpet live stream show will return with Carrie Keagan set to host the official show sponsored by Citi and Hilton Hotels. The event begins before the Induction Ceremony and will be live-streamed on rockhall.com, as well as the Rock Hall’s major social channels.

Visit RockHall.com for additional streaming details. A special exhibit dedicated to this year’s inductees will open at the Rock & Roll Hall of Fame in Cleveland on March 22.

SiriusXM will also carry a radio broadcast of the ceremony in April and special broadcasts throughout the year devoted to the Rock Hall’s Inductees—past and present— on Rock & Roll Hall of Fame Radio (Ch. 310) and VOLUME (Ch. 106).

Joe Elliott’s jacket that he wore last year on the tour is now on display at the ICONS: the influence of Elvis Presley exhibit.

The exhibit is part of the new Elvis Presley’s Memphis complex, located directly across the street from the Graceland Mansion, consisting of 12 different Elvis exhibitions.

ICONS is one of our most popular as it connects Elvis with other musical legends and today’s artists in a unique and relatable way. Superstars such as Joe Elliott, John Lennon, Dolly Parton, Buddy Holly, Johnny Cash, Jimi Hendrix, Bruce Springsteen, Elton John, Justin Timberlake, Kiss, Trisha Yearwood, Kid Rock, Carrie Underwood and Michael Bublé are featured. Their personal items, photos and quotes about Elvis continue to tell the story of his incredible impact on music and on pop culture. 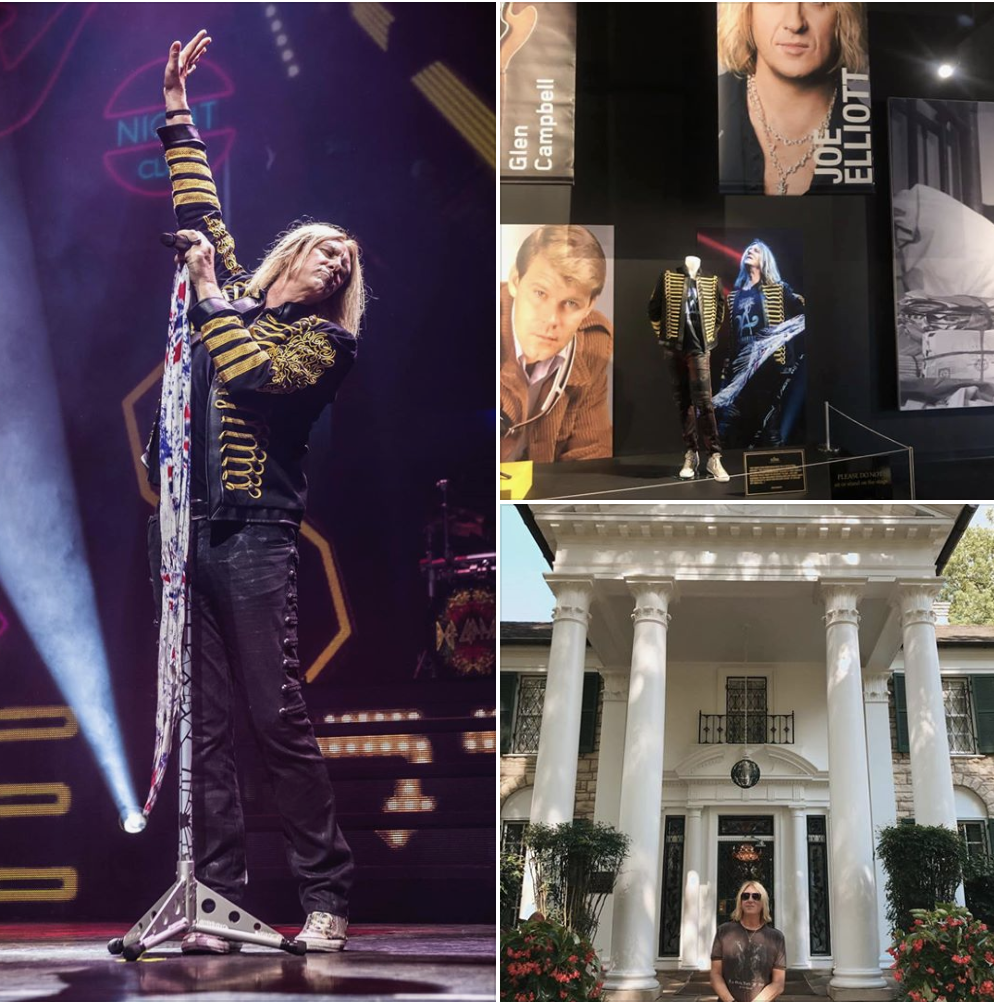 If you live in Canada you’re in luck! Live Nation Canada is running a contest where Canadian fans can enter for a chance to win a trip to NYC for the Rock & Roll Hall of Fame Induction Ceremony. Click HERE for more info. 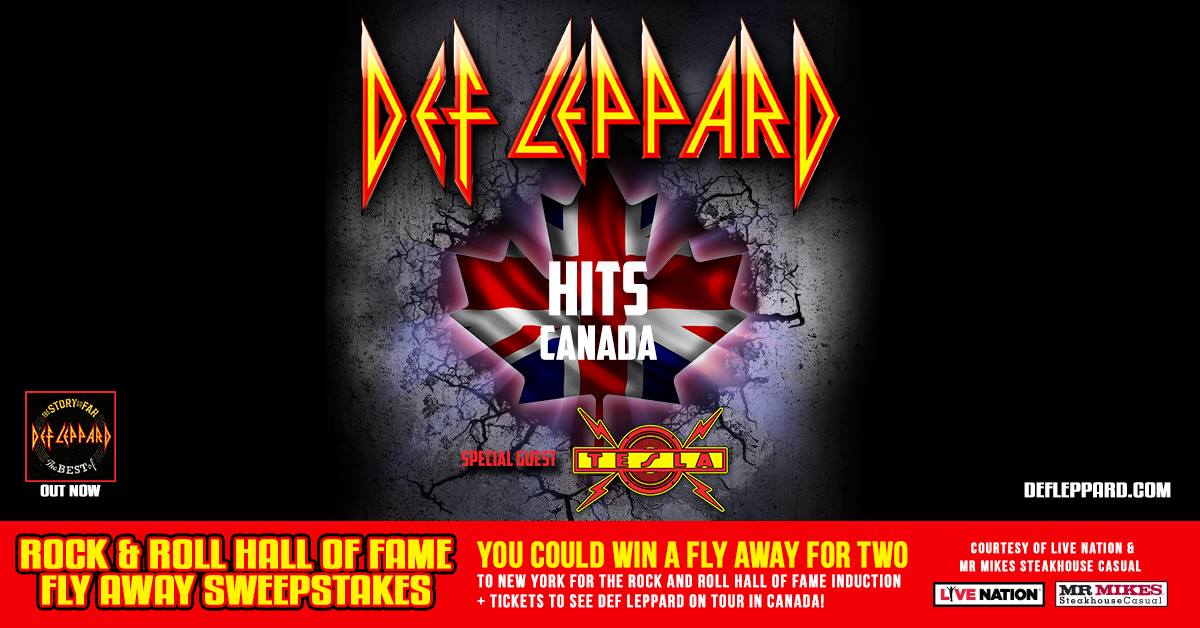