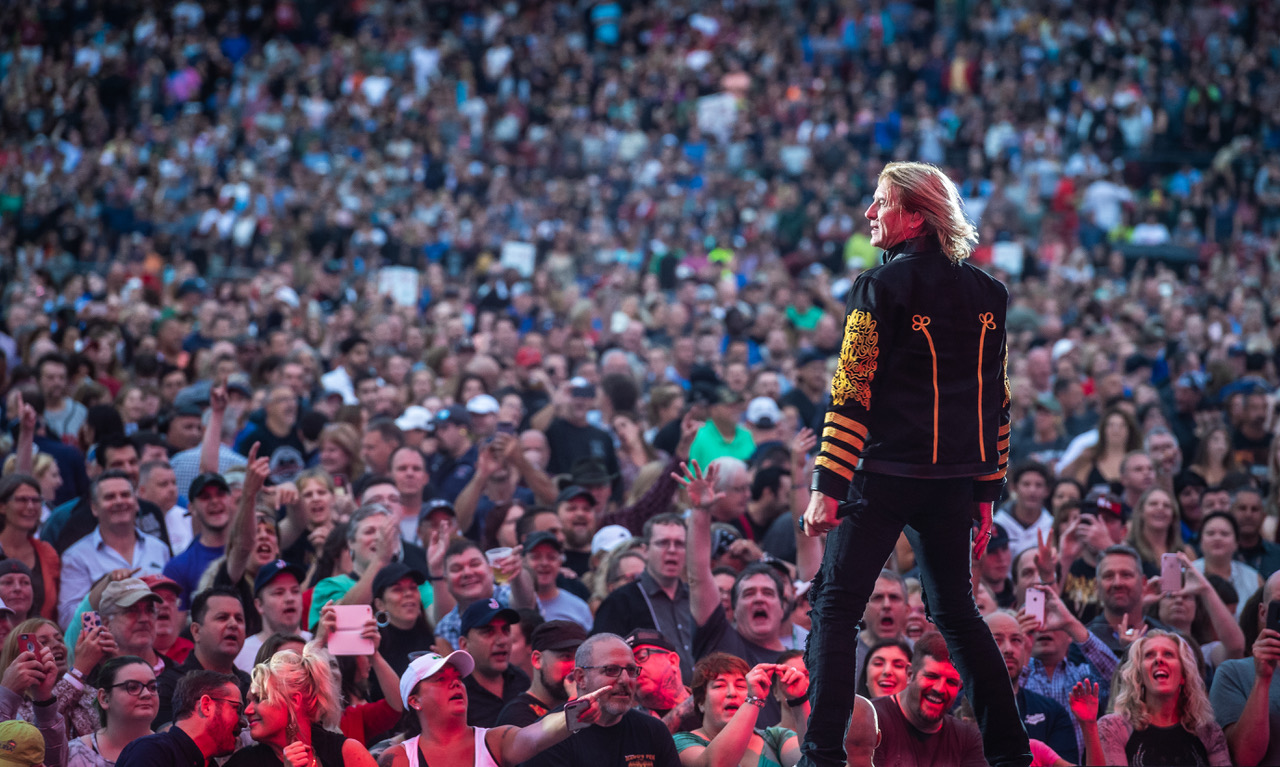 In the ’80s, when Journey and Def Leppard hit peak popularity, the idea of the two touring together would have seemed silly. Back then “Don’t Stop Believin’ ” and “Photograph” appealed to different demographics; people argued they had diametrically opposed attitudes and aesthetics. Today it’s those differences that seem silly.

And so Journey and Def Leppard have set out together on a monster trek of American stadiums — including a packed stop at Fenway Park Saturday.

Selling nostalgia like $10 Bud Lights and peeling off hits you know by heart (only one song from the modern millennium, Def Leppard’s “Man Enough,” could be heard in over three hours of music), the pair reveled in their status as rock gods with pop souls.

Journey, which headlined the night (the bands swap that position every show), found its beloved balance between Van Halen’s bombast and Air Supply’s earnest melodies.

With the band’s longtime members deep into their 60s, current frontman Arnel Pineda provided the focal point. Guitarist Neal Schon once called Pineda a mix of David Lee Roth and Bruce Lee, and he’s not wrong. The guy can spin and kick and leap with the best of them. But his voice, which amazingly matches Steve Perry’s every cry and coo and chant of na na na na na na, shocked Journey’s icon catalog to life from “Separate Ways” to “Lovin’, Touchin’ Squeezin’ ” to “Open Arms.”

The other guys matter (after all they co-wrote the catalog). Schon can wail but he wants wail in every song and sometimes the shredding hip-checked a killer melody to the ground. Keyboardist Jonathan Cain plays his role with flair but his look and overly earnest attitude scream, “What can I do to get you into this Gulf Coast timeshare today!” Hometown drummer Steve Smith outshined them both and might be the only guy who could fill in for Neil Peart or Stewart Copeland.

But this set was Pineda’s, not something one usually says about a singer a band discovered on YouTube 35 years into their career.

Def Leppard, which should headline every night, crafts songs any artist could turn into Top 40 magic. Pulling from its set list, “Hysteria” could have been huge for Roxette or Heart, “When Love and Hate Collide” could be a gold record in the hands of Kenny Chesney or Bryan Adams. But their guitar harmonies define them.

The intertwining guitar lines written by the late Steve Clark and Phil Collen, now played by Collen and Vivian Campbell, are ultimate ear worms. No matter the setting — the pristine “Animal” or dirty “Foolin’, ” the intro to “Bringing on the Heartbreak” or surprising bridge of “Love Bites” — those doubled and complementary riffs powered the songs for an army of fans in the stands wearing Def Leppard shirts.

But no one on the bill did the whole pop band masquerading as a rock band thing with the cheek and panache of opener Cheap Trick. As usual, Cheap Trick proved there’s a sonic sweet spot between “A Hard Day’s Night” and “Toys in the Attic.” As usual, they played in afternoon to a half-full stadium.