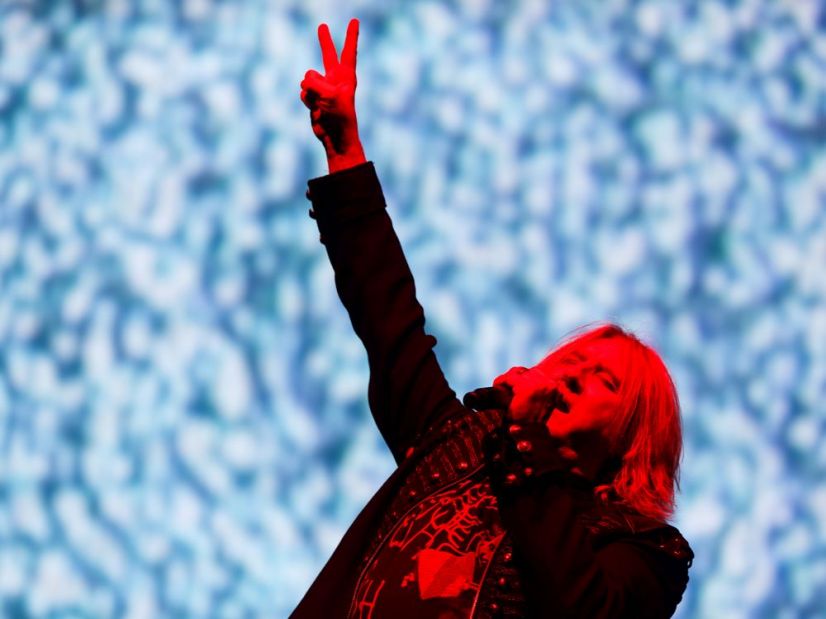 As we twist our frantic jetboats through another foaming archipelago of summer festivals with dozens of acts each, a concert like Monday night’s Def Leppard experience feels so exceptionally crisp and focused.

There in the dark, where if not pyrotechnics, at least stunning video productions brought the brain to places both psychedelic and almost heartbreakingly nostalgic for school gymnasium dances, things felt oddly simpler — an acid-wash trip to the “before time” of network TV and mall expansions.

Which is not to say passive, as anyone with ringing ears will tell you the next morning: the homonym “deaf” in Def Leppard chiming through.

For very loud the five and upper ten thousands were, mutually engaged in small-town summertime radio hits as familiar-tasting as bacon and misfired mosquito repellent.

Hands flat in front of you, tap your thumbs together, your pointer fingers straight out. Now touch the tips of those forefingers and hold that triangle up. That’s how basic this band is at its best: a volume arrow pointing to the ceiling.

For an hour and a half the English rockers pounded and slow-danced the fully packed Rogers Place class layer cake, a sea of ’80s ladies and native bangers with their arms in the air like they just don’t care.

This started with AM dashboard blammers Rocket and Animal, the screens alive with a wall of TVs showing images of Earth’s conquest of space, including everything from the Apollo missions to starman/blackstar David Bowie to Richard Nixon — the Dick who nixed the manned moon efforts.

Metal-haired bass player Rick Savage took to the thrust stage for the first of many times for lesser hit Excitable. Then Edmonton got a crucial song skipped in the last few performances on the Def Leppard Hits Canada Tour: the monolithic and actually crucial Foolin’.

Singer Joe Elliott unquestionably sang the “is anybody out there, anybody there?” bridge lower than 36 years ago, but you couldn’t even hear him under the “f-f-foolin’,” chorus anyway. Unless otherwise stated, any major bit of tape deck bank worked the same way: the Millennial-to-Boomer audience shrieking along and decked out in DL T-shirts and headbands as an absolute ocean of support, while Elliott raised his Union Jack-adorned mic stand to the stratospheric nosebleeds across the sardine can.

All the lighters virtual and analog came out for the mellower When Love and Hate Collide — then the ridiculously awesome Let’s Get Rocked hit like a shockwave.

Some metal bands start quiet, even quietly classical, like Metallica sometimes, before unleashing the dragon. Not Def Leppard, though — it’s more like a Polar Express midway DJ screaming, “DO YOU WANNA GO FASTER?!?” as we mirror the mayhem.

Let’s Get Rocked, incidentally, is almost exactly sonic ground zero for where most country music headed in the ’90s and never left — so some weird associations there, y’all.

The song that followed was even more ridiculous: its titular lyrics including, “Are ya getting it? Armageddon it!” like some long-saved Pud cartoon dropping out of a first edition Dungeon Master’s Guide. Guitarist Vivian Campbell stepped into the spotlight for this one, his beautiful Les Paul Goldtop glittering and tasty as a wet caramel.

“See? You know the words,” 59-year-old Elliott smiled inside his raspy Sheffield accent after. “This is why we love coming here.

“Look at this place. This is what we dreamed of as kids; we never thought it would last this long.”

The band next did a cover of David Essex’s Rock On in front of a blinding white screen, followed by the lovely ballad Two Steps Behind, where the players came out to the tip of the thrust stage — including drummer Rick Allen shaking a maraca — ending with Elliott singing alone in the dark.

Neon skulls with laser eyes flew through that iconic triangle for Man Enough, taking us to another gymnasium butt-grabber: Love Bites. Hilariously, the younger bros behind us slow danced, simultaneously screaming “YEAH!” at the expense of all eardrums within 10 feet.

After Bringin’ on the Heartbreak, Elliott left the band to noodle during the heavy Switch 625, the highlight of course being the drumwork of Allen, who lost his left arm in a Corvette accident in 1984.

Gloved and barefoot, he used his special gear to hit the bass, snare and tom from the floor, and inside the atomic blast of audience love after his solo, held up two fingers — peace, and “at peace” — with one of the most heartwarming grins I’ve ever seen at an arena show.

Openers Tesla also deployed such personality, singer Jeff Keith groovily noting, “We’re all still out here, floatin’, man!” As when they also opened for Def Leppard at the Coliseum in 1988, they played southern metal classics like Cumin Atcha Live, Little Suzi and that killer version of Five Man Electrical Band’s Signs, perhaps to remind us how we’re still constantly psychically infected with the lowest-common denominator pitches of paid liars every time we dare open our eyes. (For contrast, look up how São Paulo, Brazil, effectively banned advertising and signs in public — it’s jarring.)

Anyway, back to it, Def Leppard ended their set with Hysteria and a big nod to Bowie’s Heroes, then the “you got the peaches, I got the cream”-bearing anthem, Pour Some Sugar on Me. (You just heard “in the name of love” in your head, right?)

Encoritis after more unstoppable roar: the towering Rock of Ages. Elliott came at us with his arms lowered, fingers wiggling to give it up even louder. Sheesh!

Finally, the soaring Photograph, that Union Jack going up again in front of images of the band’s long history through our lives.

They came out into the crowd again, Elliott yelling, “Whoa! Holy shit!” as we would … not … let … go.

Did you not see that Wayne Gretzky in bronze outside? Yearning for the past is the exact thing we use to deny this dismal present!