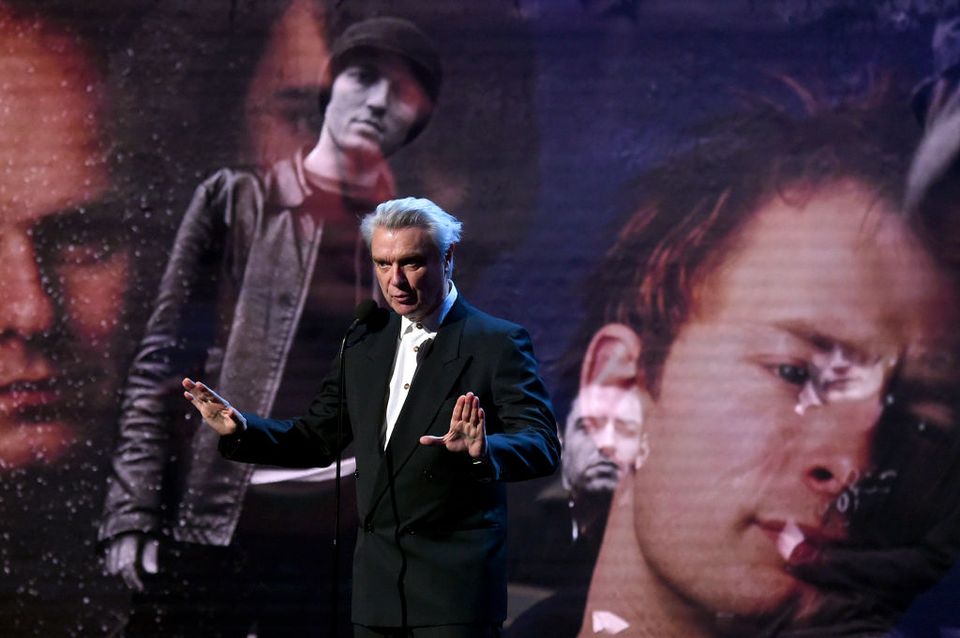 BROOKLYN, New York – It was clear from the start that the 34th annualRock & Roll Hall of Fame induction ceremony would be different and focused – as it should be – on the music.

Gone were the opening speeches, the corporate game, etc. Instead, it was Stevie Nicks, the ethereal Fleetwood Mac singer who became the first woman inducted twice into the Rock Hall, belting out her hit “Stand Back.”

A jam-packed Barclays Center stood as one to pay homage to the 70-year-old singer-songwriter, dancing – some of the crowd mimicking her signature spinning move – as she said, “Hello, New York,” as only she can.

Having Rock & Roll Hall of Famer Don Henley join her on “Leather and Lace,” from her hit debut solo album, “Bella Donna” was a pleasant surprise. Having former One Direction singer and rising solo superstar Harry Styles stand in for Tom Petty on the first single off that album, “Stop Draggin’ My Heart Around,’’ just added to that.

“She stepped onto a stage with incredible ease; I remember it well,’’ quipped Styles, who was born in 1994, in presenting her for induction.

“However you feel or want to feel, there is a Stevie Nicks song that will meet you there,’’ he said.

Nicks herself was as loquacious as she was gracious, jokingly referring to her many romances and noting she was available as a speaker if anyone needed someone who would ramble on and on.

Drummer Phil Selway, whose band Radiohead was one of two inductees who did not play – the other was Janet Jackson — thanked Hall of Famer David Byrne for presenting them for induction . . . and for letting them “borrow” one of his songs for their name, “and not asking for it back.”

In another surprise, Roxy Music founder Bryan Ferry was the only member of the band to speak after the group was presented for induction by Duran Duran’s John Taylor and Simon LeBon. Not that that was a bad thing, as it put the band onstage – minus synthesizer whiz Brian Eno, who did not attend the ceremony – for a set that began with the haunting “In Every Dream Home a Heartache.”

The band’s five-song set – which included the big hit “Avalon” and the synthesizer-laden “Editions of You” – could’ve hit stores yesterday. It’s too bad that in an earlier email interview with The Plain Dealer, Ferry noted, “I have a full programme,’’ when asked if there was a chance for a reunion.

For full profiles of the seven inductees by The Plain Dealer’s Chuck Yarborough, see cleveland.com/entertainment.

A special moment of a night full of special moments was a quote from Robert Smith in the traditional clip leading up to the induction of the Cure. Talking about the allure of the band, he said he observed the group “hasn’t changed the world, but there have been moments when we were slightly different.’’

He did that in a pretty simple way: “Put stark words to uplifting melody to get their attention.”

Inducted by former Clevelander Trent Reznor of Nine Inch Nails, the band had a way of connecting with people who previously had been isolated from the world.

“I left home for the big city of Cleveland,’’ small-town Pennsylvania native Reznor said. “Everything changed. Just being able to tune into college radio made my head explode.’’

“The first album I heard was ‘The Head on the Door,’ ’’ he said. “I hadn’t heard anything like it before. A lot of darkness I felt in my head was coming back at me through the speakers and blew my mind.”

“It’s a surprise for us, but a very nice surprise,’’ said an obviously emotional Smith, his trademark disheveled hair, eyeliner and ruby-red lipstick in full view, like some sort of emo-Goth parody of Bette Davis, in response to what till that time was the biggest ovation of the evening.

“It’s been 40 years since our first album came out,’’ said Smith, who seems almost painfully shy. “In that time, obviously there have been a lot of people who’ve played a part in the Cure story, for better or worse. I would like to thank everyone who’s been in the band.’’

Janelle Monae, inducting Janet Jackson, was equally eloquent: “Janet has a crown, glory and legacy all her own.’’

Add gracious, as Jackson spread her thanks among her family, her mentors, her producers, God and even her choreographers — including Paula Abdul.

“In 1997, my brothers were recognized for their musical passion by being inducted into the Rock & Roll Hall of Fame, and I was so proud,” Jackson said. “I witnessed along with the rest of the world my family’s extraordinary impact on popular culture, not just in America, but all around the entire globe and … and as the youngest in the family, I was determined to make it on my own.

“But never in a million years did I expect to follow in their footsteps,’’ she said. “Tonight, your baby sister has made it.”

The Zombies entered the Rock Hall 50 years to the day when their song “Time of the Season” became the No. 1 single in the United States. As if being inducted into the Rock Hall needed more cachet, that did it.

So it was a pleasure to hear the band roll into that hit, as well as “She’s Not There” and “Tell Her No,’’ pretty much the soundtrack for an era. Curiously – or maybe not – it’s one that began in a studio in Memphis, Tennessee.

“One day reaching back to 1956, my cousin played me 2-1/2 minutes of music which changed my life,’’ said the Zombies’ Rod Argent. “That music was Elvis [Presley] singing ‘Hound Dog.’

“If you didn’t live through the ’50s, it’s hard to imagine the gulf between England and America,’’ he said. “I was 11 years old, and I couldn’t imagine being a part of the same world [as Elvis].’’

But the highlight for any concert is the headliner, and the Def Leppard induction, with Queen’s Brian May presenting the band, didn’t disappoint.

May and Def Leppard lead singer Joe Elliott have known each other for years, and the Queen Hall of Famer has shared a stage with the band a time or two. He shared one particular story, about a night when Elliott saved his life.

It was the “Pyromania” tour, and, as you might expect, pyrotechnics were involved. May went into the final song jamming as hard as ever as a guest of Def Leppard at a show at the Los Angeles Forum, thinking Elliott’s exhortations and cries of “Brian! Brian! Brian!” were merely the Def Leppard’s way of saying he was impressed with May’s solo.

Just before a huge wall of flame erupted during the finale – which would have incinerated May – Elliott pulled him to safety.

Elliott himself showed off some of his charisma, noting the trials and tribulations of the band that included drummer Rick Allen losing his arm in a car crash, alcoholism claiming the life of guitarist Steve Clark, cancer for guitarist Viv Campbell and ups and downs in the band’s popularity.

“If alcoholism, car crashes and cancer couldn’t kill us, the ’90s didn’t have a [bleeping] chance!’’ he said.

The wit and wisdom – plus a story about learning his first three chords from his mother when he was 8 years old (“I’ve learned two more since then, and I realized I didn’t need them”) – made for a sweet ending to a night that lasted more than five hours.

And, as befitting a headliner, the band kept the crowd on its collective feet, rolling through hits that started with “Hysteria” and included as expected, and ended rightly so, with an audience sing-along on “Pour Some Sugar on Me.”

And in a variation of the usual all-hands-on-deck finale, Argent, the Zombies’ Colin Blunstone, May, Susanna Hoffs, Stevie Van Zandt and Ian Hunter (who will be in Cleveland in April) joined the band for an epic (if pitchy) version of Mott the Hoople’s “All the Young Dudes.”

Young dudes? Maybe not. But dudes – and two ladies – who’d earned respect . . . and enshrinement in the Rock & Roll Hall of Fame.