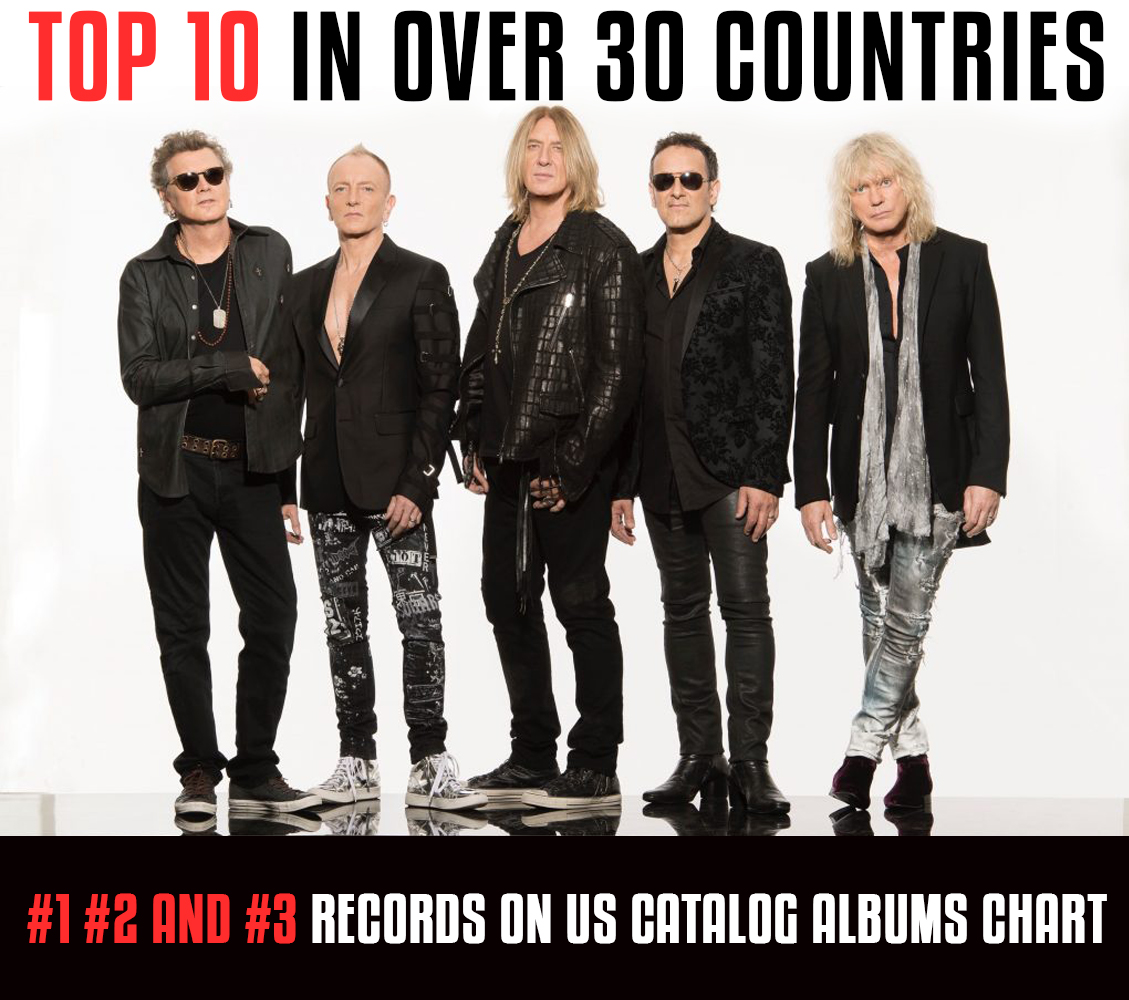 At 12:01am local time around the world on January 19, legendary British rock icons Def Leppard debuted their full recording catalog worldwide via streaming and download platforms. As they did with the original release of their records, Def Leppard dominated the worldwide charts again.  US and UK chart stats saw their albums charting in the iTunes Top 10 in more than 30 countries, including Hysteria at #3 in the US, and #5 in the UK.  Def Leppard had the #1, #2 and #3 records on the US catalog albums chart. This marks the second appearance at #1 for Hysteria, which also topped the catalog chart in 2017 on the release of the Deluxe Edition. It’s the highest chart position ever for Pyromania, which previously entered the charts at #24 in 1992. It’s also the highest result for Vault since that album topped the catalog chart in August of 2002.

One of the last multi-platinum selling acts to be made available on streaming and download, music fans from all corners of the globe are enjoying tracks and albums from Def Leppard who have sold more than 100 million albums worldwide to become one of rock’s most enduring and influential bands.

As a cornerstone of rock and roll’s history, Def Leppard’s substantial career includes numerous hit singles including their first early chart hit “Wasted” — to their radio and MTV staples “Bringin’ On The Heartbreak”, “Photograph”, “Rock of Ages”, “Too Late”, “Animal”, “Armageddon It”, “Love Bites”, “Rocket”, and “Let’s Get Rocked.” Their ground-breaking multi-platinum albums—including two of the best-selling albums of all time with sales of more than 10 million copies each in the U.S. alone, Pyromania and Hysteria, captured some of the group’s legendary tracks, bringing together classic Leppard hits such as “Pour Some Sugar on Me”, “Hysteria” and “Foolin’.”  The group continued their success expanding into the world of film, covers, and new collaborations including “Two Steps Behind” from the film Last Action Hero, “No Matter What”/”Waterloo Sunset” and “Nine Lives” with Tim McGraw as well as straight ahead Def Leppard hits “When Love and Hate Collide”, “Slang”, “Work It Out”, “Promises” and “Now.” Finally, all of Def Leppard’s awe-inspiring music is available for everyone around the world, from the band’s eponymous debut EP through to their most recent album.

In conjunction with the release of their catalog, Def Leppard announced they will embark on a massive co-headlining tour with Journey. Comprised of stadiums and arena venues around the U.S., the 58-city run is set to kick off in Hartford, CT on May 21st and will wrap in Los Angeles, CA on October 6th. Tickets for most dates go on sale to the general public beginning Saturday, February 3 at 10 AM local time at Ticketmaster.com. American Express® Card Members can purchase tickets before the general public in select dates now. Additionally, Def Leppard VIP Packages are also available through Epic Rights, visit http://www.DefLeppardRockBrigade.com for all information. A full list of tour dates and on sale details can be found below.

DEF LEPPARD TITLES NOW AVAILABLE ACROSS ALL STREAMING AND DOWNLOAD PLATFORMS INCLUDE: