Close friends with Def Leppard for decades, Brian May has guested on stage with them numerous times, including for a performance of ‘Now I’m Here’ at the Freddie Mercury Tribute Concert for AIDS Awareness in 1992.

Speaking on stage at Brooklyn’s Barclays Center, Brian spoke about joining Def Leppard at a Los Angeles gig in 1983 to play a mashup of Creedence Clearwater Revival’s ‘Travelin’ Band’ and Led Zeppelin’s ‘Rock and Roll’, which nearly ended with him being engulfed by flames.

Fortunately for Brian, Def Leppard frontman and Planet Rock DJ, Joe Elliott, was on hand to save him.

“Cut to September ’83, I’m in Los Angeles, again we’re recording an album, which, this time, is The Works, I think, and I go out. This time, Def Leppard are playing the local arena, which is the legendary L.A. Forum. I go down there, very inconspicuous, I sit in the back, and when these boys hit the stage, I have to tell you — I have never seen anything like it. I’ve seen some great shows in the Forum, but I’ve never seen an audience react like that. They got to their feet, they never sat down and they screamed and shouted the whole way through the performance. Def Leppard killed that night. I went backstage to see them afterwards, they invited me, and just like when we first played in the States, all their moms and dads are there — very proud moms and dads, and I get introduced to them. And the boys say, “Will you come out and play with us tomorrow night?” So I said yes, and the rest is history. We played “Travelin’ Band.” It’s history because I nearly lost my career and my life because this is Pyromania and the production has all kinds of fire. Joe warned me, he said, “Watch out for the fireworks at the end, just be careful.” But I’m at the end, we finish “Travelin’ Band,” we’re up behind the drums and there’s a kind of chasm in front of us where the fire’s about to come out — I have no idea. I’m gone, I’m like giving it all this, and Joe’s going, “Brian, Brian!” And I’m thinking he’s just kind of appreciating me, you know? He’s going, “Brian, Brian, the fire!” Anyway this huge sheath of flame comes up in front of me, and just in time, Joe’s dragged me out of it — otherwise I wouldn’t be here tonight. So early on in their career, Joe Elliott saved my life!” 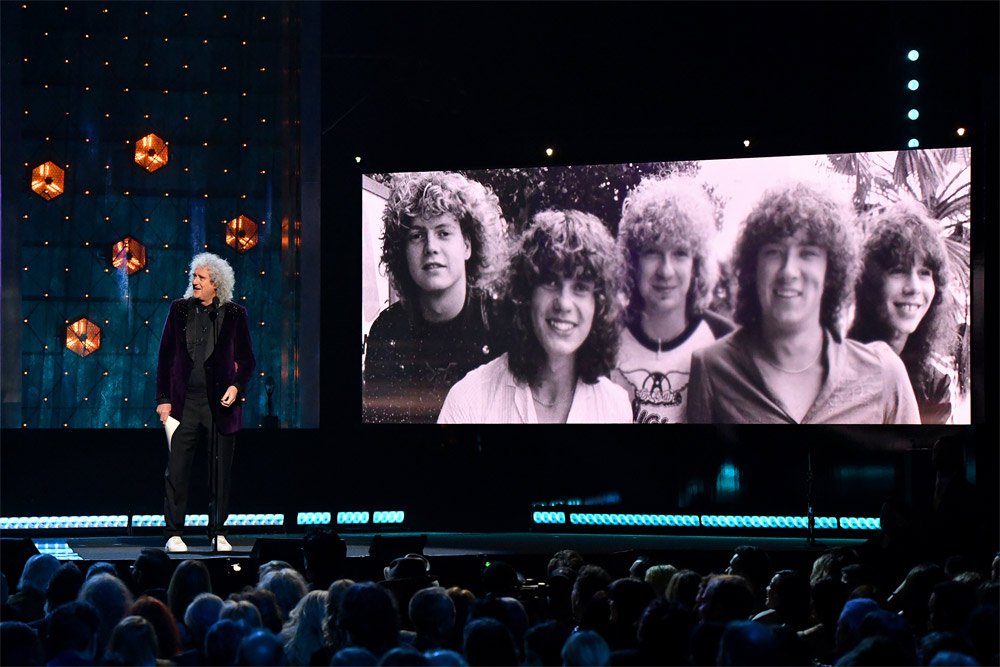 Elsewhere in his speech, Brian praised Def Leppard saying: “Not everybody realises that these guys are not just crowd pleasers. They also embody such an amazing technical excellence. They have it all.

“I regard all these guys as great friends and kind of part of my family, that’s why it’s so important for me to be here. I wouldn’t have let anybody else do this (induct them).”

He also hailed them as “a magnificent rock group, in the classic tradition of what a rock group really is” and “a bunch of magnificent human beings.”

Following their induction, Def Leppard closed the Rock and Roll Hall of Fame ceremony on Friday night with an all-star performance of Mott The Hoople’s ‘All The Young Dudes’.

Stevie Nicks, Radiohead, The Cure, Roxy Music, The Zombies and Janet Jackson were also all inducted into the Rock and Roll Hall of Fame on Friday.