Joe Elliott’s side band DOWN N OUTZ release their brand new live album/DVD “The Further LIVE Adventures Of …” available everywhere now on 2 CD/DVD, Blu-ray, vinyl, digital download & across streaming platforms.  This live album was recorded in Sheffield, UK at the Sheffield Corporation back in December 2014.  Also available today are re-issue albums “My Re-Generation” & “The Further Adventures Of …”.

“I’m sad to hear of the passing of Malcolm Young. As a young new band it was great to get the opportunity to open for AC/DC on the Highway To Hell tour in 1979 and we certainly learned a thing or two.  He was an incredible rhythm guitar player & was the glue for that band onstage & off. RIP Malcolm, say hi to Bon ….” – Joe

Vivian Campbell’s side band Riverdogs new album “California” is now available everywhere. Check out the video for the single “American Dream”! Riverdogs originally formed in 1989 and released their first album in 1990.

New in depth interview w/ Phil and Rock Brigade Podcast talking new dvd, new music, Producer Mutt Lange, Tesla’s new album, the story behind the idea of  playing “in the round” for the Hysteria Tour,  Steve Clark, as well as a game of “what’s the weirdest questions for Phil!  Listen now!

On this day in 1992, DEF LEPPARD performed at the Freddie Mercury tribute concert “A Concert For Life” held at Wembley Stadium in London England.

Below is a special message from Joe regarding this concert and HERE are some of Joe’s personal photos form the event!

I got a call from Brian saying Roger was organising a tribute gig for Freddie and would we consider getting involved.  I thought about it for 2 seconds and said, “er, yes !” … then I mentioned it to the band!! …. The truth is, it was a no brainer … We all loved Queen, we’d been asked by the band themselves not some 3rd party organiser …. Of course, we’d all rather have not had to do it, we’d have all preferred Freddie to still be with us.

The actual day was a blur, hanging out with so many people!! .. Ian Hunter, Mick Ronson (it turned out to be the last live performance he would ever do), Elton, Robert Plant, G’n’R, Cindy Crawford !! even Elizabeth Taylor & Liza Minelli !!! … It was a nervy performance truth be told , technical problems with Rick’s kit, Viv’s 1st real performance with us (we’d played a warm up show in a tiny club in Dublin 3 days earlier), 75,000 rock fans in Wembley Stadium & I heard possibly a BILLION watching on TV !!! no pressure then …..

We were fortunate enough to have a current hit single with “Lets Get Rocked”, so with that, our first ever UK hit “Animal” and  with Brain May graciously accepting the offer to join us for a 3 way guitar blitz on “Now I’m Here” we did our bit … Looking back, we were the only British band on the bill, so it was nice to be there & be so well accepted by Queen’s fans & play our tribute to someone who was a major influence on DL in the first place ….

Another personal highlight was contributing backing vocals (along with Phil Collen) on “All The Young Dudes”.  The remaining members of Queen, David Bowie, Ian Hunter & Mick Ronson all playing on the same song !!! outside of anything I’ve done with D.L., it’s absolutely my most favourite on stage musical moment EVER !!! ….. and for that & everything else you ever did, Freddie Mercury, I thank you !!” – Joe Elliott 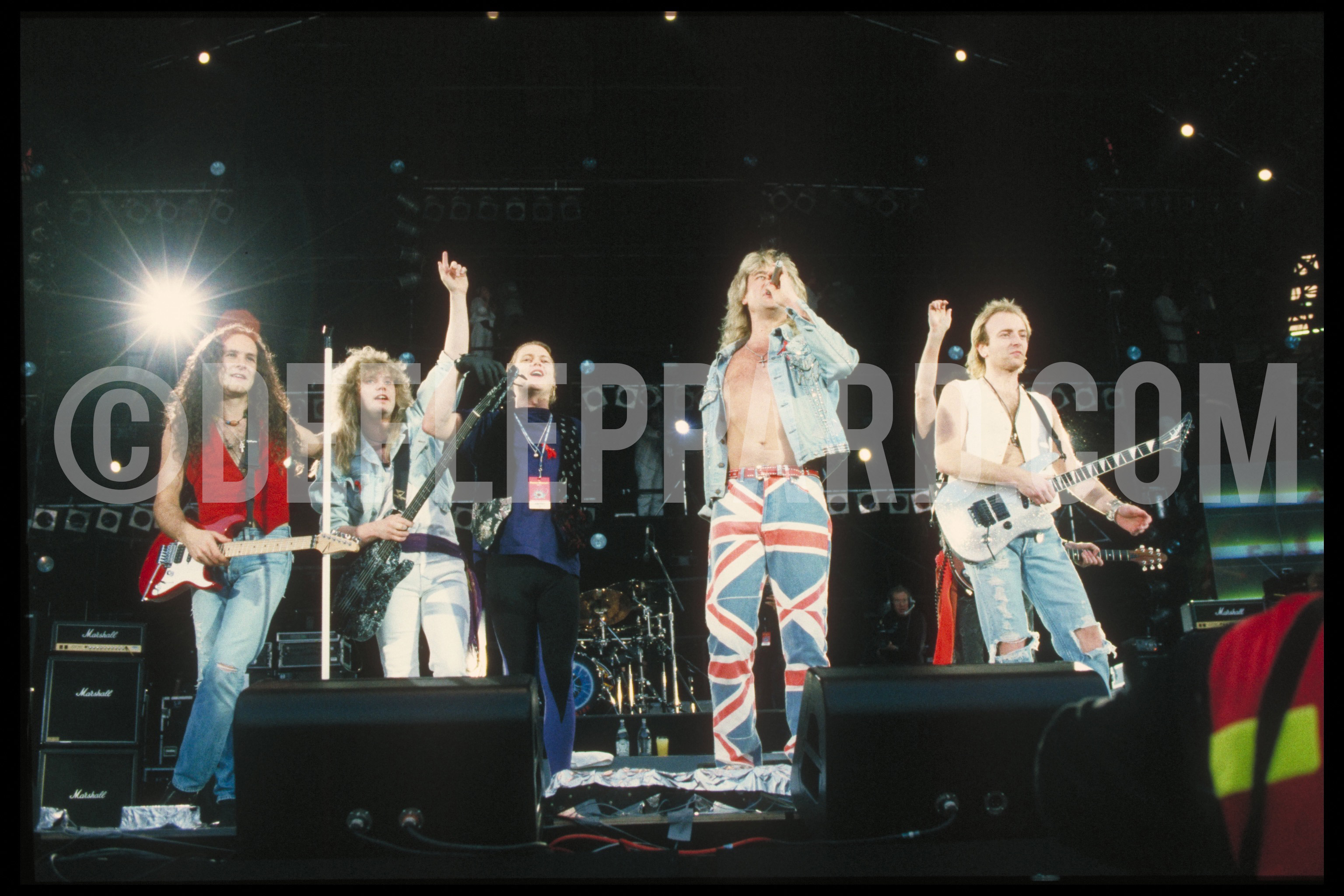 DEF LEPPARD recently performed in Baltimore, MD on 14 April.   Check out this cool stage set up and show performance clips in this new “behind the scenes” video from Rick Allen’s drum tech Jeff Diffner.

DEF LEPPARD recently performed in Montreal on 10 April for the 2nd date of the 2017 tour.  Check out this great behind the scenes video from Rick Allen’s drum tech Jeff Diffner.

Tickets & VIP packages on sale now HERE.  Going to the show? Send us your photos using the hashtag #DefLeppard2017 on social media.